For the Greeks and Romans, the “dog days” occurred around the time when the Dog Star Sirius appears to rise just before the sun, in late July and continuing through August. They referred to these days as the hottest time of the year, a period that could bring confusion, fever, or even catastrophe. 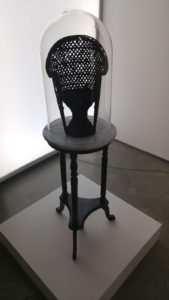 Fittingly, I traveled with a group of ArtTable members in the midst of the summer monsoons to visit The School in Kinderhook, NY – Gallerist Jack Shainman’s upstate venue for larger scaled works, exhibitions and art storage. More relaxed than market-driven Chelsea, works by one of my favorite artists, Radcliffe Bailey, were on display including his Theorist’s Throne (2012), an appropriation of the iconic photograph of Huey Newton in the Peacock Chair that became a symbol for the Black Panthers. Here in a bell jar, traditionally used for covering delicate objects or depicting an environment in which someone is protected from the outside world, the artist alludes both to the memory and to the vacuum left after Newton’s demise.
We then headed south to the Kingston/Woodstock area for a delightful respite at Stoneleaf Retreat, Helen Toomer’s Artist-in-Residence program for women artists. Somewhere around New Paltz I believe our mini-bus hydroplaned through increasingly deep waters. Painter Theresa Chromati, Performance Artist Katiushka Melo and Photographer Rebecca Reeve, introduced us to their work and what it means to participate creatively as women artists in this almost ideal environment for work and reflection. 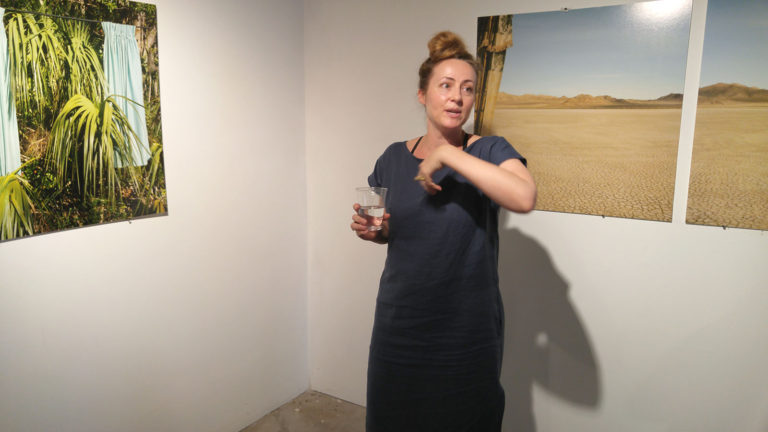 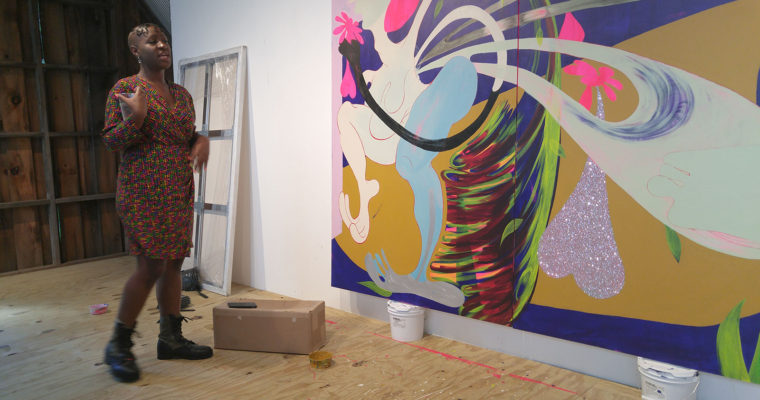 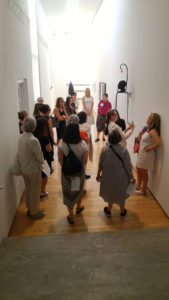 The Fall Season looks promising: Opening on September 7 at A.I.R. Gallery is True Value: The Works of Brookie Maxwell, 1956-2015. The late activist artist and a dear friend, created narrative paintings, sculptures and installations that were often controversial and included multi-disciplinary collaborations with actors, dancers and members of the communities she engaged.

I’m looking forward to Soul of a Nation: Art in the Age of Black Power at the Brooklyn Museum, and the major retrospect of Charles White at MoMA in October. Off to Expo Chicago late September and will bring you highlights from one of the first art fairs nationwide in a city that is having a new artistic and cultural renaissance. Cheers!

Author: gerithomas
No Time to Sit Around: An Unexpected Memoriam

This website uses cookies to improve your experience while you navigate through the website. Out of these, the cookies that are categorized as necessary are stored on your browser as they are essential for the working of basic functionalities of the website. We also use third-party cookies that help us analyze and understand how you use this website. These cookies will be stored in your browser only with your consent. You also have the option to opt-out of these cookies. But opting out of some of these cookies may affect your browsing experience.
Necessary Always Enabled
Necessary cookies are absolutely essential for the website to function properly. This category only includes cookies that ensures basic functionalities and security features of the website. These cookies do not store any personal information.
Non-necessary
Any cookies that may not be particularly necessary for the website to function and is used specifically to collect user personal data via analytics, ads, other embedded contents are termed as non-necessary cookies. It is mandatory to procure user consent prior to running these cookies on your website.
SAVE & ACCEPT